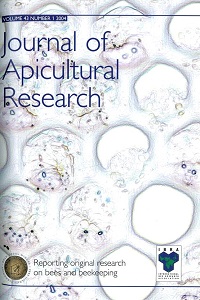 The long-term incidence (% of apiaries infested) of the mite Acarapis woodi in southern Greece was monitored. Over 10 years the overall average infestation was 5.43%. Yearly maximum infestation (average 28.9%) exhibited a decreasing trend from 1986 to 1995. Infestation tended to peak in November and March and was restricted or absent during the summer. Additionally, seasonal variation of A. woodi density (% of individuals infested per colony) in three groups of colonies was followed for almost three years. At the beginning, Groups I and II had infestation rates of 10.75% and 11.25%, respectively, while Group III was not infested. Group I received no acaricide treatment while Group II was treated with 50 g menthol twice a year. There was no evidence that mites had transferred from infested Groups I and II to nearby non-infested Group III, and no difference in honey production between the groups was observed. There was a rapid decline in the infestation in all three groups, irrespective of treatment, with complete disappearance about seven months before the end of the experiment.