Tropospheric Ozone: a Menace for Crops and Natural Vegetation in Greece 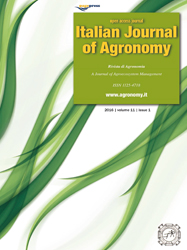 Based on instrumental monitoring (AOT40s) and phytodetection (with Bel-W3 and KK6/5 tobacco cultivars) data we evaluated ambient ozone phytotoxicity in Greece. In the greater region of Mesogia-Attica, during the summer of 2000, the year before the new airport Eleftherios Venizelos (March 2001) began operating in this region, the AOT40s (ppb*h) were 16,325 over 110 days at Spata; 18,646 over 113 days at Markopoulo; 8,093 over 22 days at Artemis and 16,679 over 121 days in Athens. The Bel- W3 and KK6/5 plants were extensively injured at all places with the greatest injury occurring at Artemis. During the same summer, ozone was also monitored in three rural areas of Corinth, at the Astronomical Observatory of Krionerion, Bogdani Hill and Kiato; The highest average daily AOT40 (192 ppb*h) was observed in Krionerio, and it was almost equal to that occurred in Athens (193 ppb*h). Bel-W3 and KK6/5 plants placed at 11 rural areas in Corinth showed extended injury. The following year (2001), high injury was observed on other sets of bioindicator plants exposed in a network of 28 locations throughout the greater area of Volos and Pelion Mountain. Symptoms were more severe at Mortias, Xinovrisi, Tsagarada, Makrinitsa and Chania. The AOT40 (May-July) was 11,391 and 10,351 ppb*hours for 2001 and 2002 respectively. Severe ozone-like symptoms have also been observed on field-cultivated grape vines, onion and watermelon plants. Synoptically, our investigations suggest that ozone occurs in the Greek mainland at levels that are potentially phytotoxic for sensitive crop species and for sensitive natural vegetation species including forest trees.