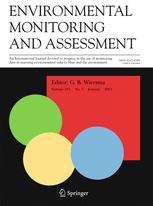 The well-known moss bags technique was applied in the heavily polluted Thriasion Plain region, Attica, Greece, in order to study the spatiotemporal distribution, in the atmosphere, of the following 32 elements: Na, Al, Cl, Ca, Sc, Ti, V, Cr, Mn, Fe, Ni, Co, Zn, As, Se, Br, Sr, Mo, Sb, I, Ba, La, Ce, Sm, Tb, Dy, Yb, Hf, Ta, Hg, Th, and U. The moss bags were constituted of Sphagnum girgensohnii materials. The bags were exposed to ambient air in a network of 12 monitoring stations scattered throughout the monitoring area. In order to explore the temporal variation of the pollutants, four sets of moss bags were exposed for 3, 6, 9, and 12 months. Instrumental neutral activation analysis was used for the determinations of the elements. The data were analyzed using the Pearson correlations, the partial redundancy analysis, and the biplot statistical methods. Some pairs of elements were highly correlated indicating a probable common source of origin. The levels of the measured pollutants were unevenly distributed throughout the area and different pollutants exhibited different spatial patterns. In general, higher loads were observed in the stations close to and within the industrial zone. Most of the measured elements (e.g., Al, Ca, Ni, I, Zn, Cr, and As) exhibited a monotonic accumulation trend over time. Some elements exhibited different dynamics. The elements Mn, Mo, and Hg showed a decreasing trend, probably due to leaching and/or volatilization processes over time. Na and Br initially showed an increasing trend during the winter and early spring periods but decreased drastically during the late warm period. The results further suggest that the moss bags technique would be considered valuable for the majority of elements but should be used with caution in the cases of elements vulnerable to leaching and/or volatilization. It also suggests that the timing and the duration of the exposure of moss materials should be considered in the interpretation of the results.